2016 will perhaps be remembered most for the tumultuous political events that took place on both sides of the Atlantic, with the Brexit vote in the UK, and the election of Donald Trump in the US. In America at least, Dylan Thomas seems to have become a go-to-poet when words are required to express the emotions stirred by those political events. Words from Dylan’s Do Not Go Gentle Into That Good Night were quoted (or rather usually misquoted) on numerous occasions, including by outgoing Secretary of State John Kerry who claimed that he would not “go quietly into the night” during the Trump presidency. Former Democratic presidential hopeful Bernie Sanders paraphrased on twitter with “We are not going silently into the night”; Cher reflected on young people’s protests following Trump’s election on twitter with “They Will Not Go Gently”; and Bruce Springsteen told Channel 4 News that he didn’t think Trump would go “gently into the good night”.  The poem has perhaps become better known across the Atlantic in recent years following it’s use in the 2014 film Interstellar, and some of the misquoting or paraphrasing may owe it’s origins to the 1996 blockbuster Independence Day in which a fictional President of the United States declares “we will not go quietly into the night!”. 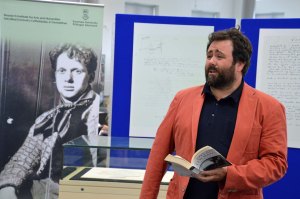 At the end of last year’s review we speculated whether 2016 would see the discovery of any more lost Dylan Thomas treasures, and we haven’t been disappointed. Swansea University’s increasingly significant Thomas collection was enhanced by the acquisition, at Sotheby’s of New York, of the working manuscripts of two poems, ‘Unluckily for a Death’, and ‘Into her Lying Down Head’. The manuscripts went on public display at the University’s new Bay Campus on May 14th, International Dylan Thomas Day. The previous day saw the donation to the British Library of a newly discovered memoir by Dylan’s former Laugharne GP, Dr David Hughes. Professor John Goodby, who made the donation after being given the documents by their former owner Charles Barber, told the BBC that the memoir described Dylan’s behaviour when living in Laugharne as ‘shy and retiring’.

It’s heartening that over sixty years after Dylan’s death, new material is still emerging, and that it’s finding it’s way into the collections of British institutions, and it’s encouraging that International Dylan Thomas Day is proving to be a focus for the showcasing of Dylan’s legacy. The second annual day on May 14th saw new and imaginative ways to celebrate Wales’ best know poet. 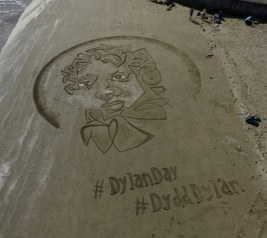 The day’s celebrations began on the beach at New Quay, Ceredigion, where sand-artist Marc Treanor produced a stunning re-creation in sand of the Jonathan Edwards’ designed 2016 Dylan Day logo. Events took place across Wales, and further afield, in England, Australia, Italy, and the USA. The new paperback edition of Dylan’s Collected Poems was launched at an event hosted by the book’s editor John Goodby at the Wheatsheaf in London’s Fitzrovia, and in Swansea a new phone app based on Dylan’s Return Journey was launched during a promenade performance by Lighthouse Theatre. Canadian rap artist Baba Brinkman composed a heartfelt hip-hop tribute to Dylan, and leading figures from the arts and politics in Wales such as Michael Sheen, Gillian Clarke and Rhodri Morgan, lent their support to the day. The hashtag #DylanDay was trending on Twitter in the UK, as it had on May 14th in 2015. You can see some of the twitter highlights here.

Swansea was once again at the centre of events, with a highlight of the day being the award of the Dylan Thomas Prize at a ceremony in the new Great Hall at Swansea University’s Bay Campus. The 2016 award went to Max Porter for his book Grief is the Thing with Feathers, and the hugely acclaimed book went on to secure Porter the Sunday Times Young Writer of the Year Award in December.

May 14th was also chosen as the day to launch the new website about Dylan Thomas, www.discoverdylanthomas.com. The site, which aims to be a hub for all online content relating to Dylan Thomas, as well as providing detailed information on Dylan’s life and work, was masterminded by Dylan’s granddaughter Hannah Ellis, and is the official site for the Dylan Thomas family and the Dylan Thomas literary estate.

October’s Rio Film Festival saw the first public screening of the long-awaited, Steven Bernstein directed, Dominion, starring Rhys Ifans and John Malkovich. The film was shot in Canada in 2014, but has been delayed by financial issues. Initial reviews have been positive and we can look forward to a full cinematic release in 2017. View trailer here.

Also making it’s debut in 2016, was the short film about Caitlin, Love Somehow, directed by Kate Cheeseman. The film was adapted from the one-woman show The Same Boat by Phil Bowen, and was shot on location in Laugharne. It stars Sally George as Caitlin, with Gruff Rhys Jones as the voice of Dylan. The film has had a BAFTA screening and has featured at a number of festivals, where it’s picked up a number of awards. We can expect a first Welsh screening during 2017. 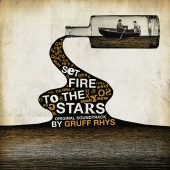 The Gruff Rhys composed soundtrack to the 2014 film Set Fire To The Stars, which starred Celyn Jones and Elijah Wood, was released on vinyl and other formats in September.

Record Store Day in April saw the release of a vinyl EP of recordings of Dylan Thomas poems read by the late Howard Marks. Poignantly the release came just a week after Marks’ death on April 10th, at the age of 70.

Michael Stimpson composed a Dylan Thomas inspired song cycle for baritone and harp, Dylan & the Drowing of Capel Celyn, which was released on CD by Stone Records.

Dylan’s work continued to inspire musicians, with veteran rocker Iggy Pop recording a reading of Do Not Go Gentle Into That Good Night, and the Manic Street Preachers featuring quotations from Dylan’s work as banners at their gig at Swansea’s Liberty Stadium. Congratulations to Bob Dylan, the man who may (or may not) have taken his name from our Mr Thomas, on the award of the Nobel Prize for Literature.

On stage we saw a Hollywood A-lister join the ranks of those to have portrayed Dylan Thomas. Jack Black played the part of Dylan in a stage reading of Melissa Berton’s award-winning play ‘Dylan’ at the Geffen Playhouse in Los Angeles.

2016 proved to be a quiet year on the publishing front. We had to wait until November for the first new Dylan Thomas related title, when Parthian Books published Ugly, Lovely: Dylan’s Swansea and Carmarthenshire of the 1950s in Pictures. The book, edited by Hilly Janes, features the photographs of Dylan’s places taken by her aunt, Ethel Ross. The book also includes the first UK publication of Dylan’s little-know script Lunch at Mussolini’s. Those lucky enough to have been at the London launch of the book will have seen actor Guy Masterson perform the script for the first time.

The Collected Poems of Dylan Thomas, edited by John Goodby, was issued in paperback by Orion in May, and Kate Roiphe included a chapter about Dylan’s death in her book The Violet Hour: Great Writers at the End.

Dylan’s Laugharne writing shed was a finalist in the Channel 4 Amazing Spaces Shed of the Year competition, where it competed in the Historic category.

Agreement has been reached with the new owners of the historic Chelsea Hotel in New York to maintain the footprint of room 205 as a memorial to Dylan Thomas. Dylan was staying in that room when he fell ill in 1953. It is proposed that a bronze plaque will be placed on the wall outside of the apartment. It will read:

The Welsh laureate last lived and labored herein, the former Suite 205,.
the footprint of which has been preserved, in perpetuity.

Dedicated to Stanley Bard, Hotel Chelsea’s steward of a half century,
whose ‘Rest Stop for Rare Individuals’ was renowned throughout
generations of artists, and echoes in their works.

The annual wreath laying at Dylan’s memorial in Poet’s Corner, Westminster Abbey, took place in November. The well attended service included a reading by Guy Masterson, a performance of ‘Being But Men’ by the Dylan Thomas Sound Project, a performance of the ‘Reverend Eli Jenkin’s Prayer’ by Dylan’s son-in-law Trefor Ellis, and a reading from A Child’s Christmas in Wales by Dylan’s seven-year-old great-grandson Charlie Jackson.

The Dylan Thomas Society held their annual dinner in December for the first time this year, and members were entertained with a performance of A Child’s Christmas in Wales by Adrian Metcalfe at Morgan’s Hotel in Swansea.

March 2016 saw the passing of Beatles’ producer Sir George Martin at the age of 90. In 1988 Sir George masterminded the recording of Under Milk Wood with an all-star Welsh cast, led by Sir Anthony Hopkins. Actor Gareth Thomas who appeared in that production as Mog Edwards, and who is perhaps best known for his role in BBC television series Blake’s 7, died in April at the age of 71. April also saw the death of former drug-smuggler and author Howard Marks. One of Marks’ final projects was the recording of several Dylan Thomas poems set to music, for an EP released on Record Store Day. Leading jazz saxophonist Bobby Wellins, who played on Stan Tracey’s seminal Under Milk Wood Jazz Suite, died in October at the age of 80. October also saw the death of Welsh painter Andrew Vicari at the age of 84. Once regarded as Britain’s richest living painter, Vicari painted a number of portraits of Dylan Thomas. At the memorial service for television writer Carla Lane, who died in May at the age of 87, former Brookside actor Dean Sullivan recited Dylan’s Do Not Go Gentle Into That Good Night.

What can we look forward to in 2017? In the year that marks the 80th anniversary of Dylan and Caitlin’s wedding in Penzance, the Dylan Thomas Society celebrates it’s 40th birthday, and the Laugharne Weekend Festival celebrates it’s 10th birthday. In April, University of Wales Press publishes John Goodby’s Discovering Dylan Thomas: A Companion to the Collected Poems and Notebook Poems, and we should be able to look forward to the UK theatrical release of Steven Bernstein’s Dominion. We should also look out for a song about Dylan and Caitlin on the forthcoming Manic Street Preachers album, and for the DVD release of A Poet in New York. May 2017 will be a focus for celebrations with the third International Dylan Thomas Day on May 14th, and the award of the 2017 Dylan Thomas Prize on May 10th. Here’s to 2017, and let’s keep raging.

Thanks to Secret Cinema for the photograph of Dylan’s words projected on a tower block. Thanks to Daniel Bamsey on twitter for the Manics image. Celyn Jones photograph and wreath-laying photograph by Andrew Dally.

Like Loading...
‹ The Women’s March: Raging with Dylan Thomas
International Dylan Thomas Day: A look back in pictures ›