Welcome to the winter news round-up where we take a look back at the second half of 2017 and look forward to 2018.

In print we saw a new US edition of The Poems of Dylan Thomas (edited by John Goodby), and a new two-volume paperback edition of Dylan Thomas The Collected Letters (edited by Paul Ferris). News came that the wait to see Rhys Ifans as Dylan Thomas in Dominion may soon be over as the worldwide rights have been sold. October saw celebrations for the 103rd anniversary of Dylan’s birth, and in Swansea celebrations marked the fiftieth anniversary of the death of Dylan’s close friend Vernon Watkins. The anniversary of Dylan’s death was marked by the annual wreath-laying service at Westminster Abbey on November 11th, and Dylan continues to be celebrated and referenced in the media including two appearances on the BBC’s The One Show.

The Poems of Dylan Thomas edited by John Goodby, was published in the US by New Directions on October 31st. 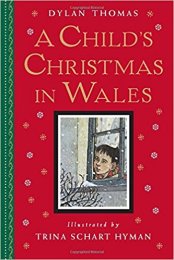 The US edition of A Child’s Christmas in Wales, with illustrations by Trina Schart Hyman, was reissued by Holiday House on October 17th. 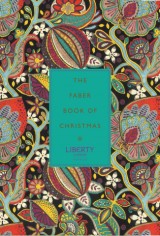 A Child’s Christmas in Wales also featured in The Faber Book of Christmas, which was published in October 5th.

Hilly Janes’ The Three Lives of Dylan Thomas will be published in paperback in March 2018.

Dylan played a surprising role in one of the Christmas periods bestselling titles when Donald Trump’s head was superimposed onto Dylan’s body and used as the cover of The Beautiful Poetry of Donald Trump. Here’s another image from the same shoot, by Australian photographer Francis Reiss, used on a CD cover. Francis Reiss died in December 2017 (see Goodbye section below).

Worldwide sales rights have been agreed for Dominion, starring Rhys Ifans as Dylan Thomas, with a 2018 release date looking likely for this long-awaited film.

Gruff Rhys’ soundtrack to Set Fire to The Stars was shortlisted for the 2017 Welsh Music Prize, but missed out, with the award going to The Gentle Good. 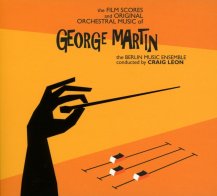 George Martin’s overture for Under Milk Wood is included on The Film Scores and Original Orchestral Music of George Martin, released by Atlas Réalisations on November 10th.

A crowd-funded film adaptation has been made of Dylan’s short story The Outing. Directed by Cian Llewelyn, and filmed in Nottinghamshire, the short film is likely to appear at festivals.

Dylan features in the lyrics of Goldie Lookin Chain‘s latest song Fear of a Welsh Planet, with Dylan’s Writing Shed at Laugharne featuring in the video.

It’s expected that Resistance is Futile, the forthcoming studio album by the Manic Street Preachers, due out in April 2018, will include a song called Dylan and Caitlin.

Dylan’s poem The Hunchback in the Park featured on the BBC’s The One Show, and another edition of the same programme featured a specially commissioned pop-up book illustration inspired by A Child’s Christmas In Wales. Sky Arts’ Landscape Artist of the Year featured a piece on Dylan during an episode where contestants painted a view of Rhossili beach. Dylan also featured on an episode of BBC Wales’ travel series James & Jupp, when comedians Elis James and Miles Jupp visited Laugharne. Laugharne also featured prominently as the location for recent S4C drama Un Bore Mercher starring Eve Myles. Channel 5’s Celebrity 5 Go Motorhoming visited Fishguard in Pembrokeshire and discussed the location filming for the big screen adaptation of Under Milk Wood that took place there in 1971. Sir Tom Jones recited a short extract from A Child’s Christmas in Wales on the BBC One programme Tom Jones and Beverley Knight’s Gospel Christmas.

Wetherspoons’ founder Tim Martin chose Dylan’s Poem in October when he appeared on Desert Island Discs. On the BBC Radio 4 programme A Place Called Home Frances Barber revealed that her acting career began with a part in a school production of Under Milk Wood.  A Radio 4 adaptation of Laurie Lee’s memoir Village Christmas included Lee’s description of seeing Dylan in London “like a plump furry little mole”. A Radio 4 drama about ageing by Mike Harris had the Dylan inspired title of Do Not Go Gentle. Dame Sian Phillips recited A Child’s Christmas in Wales on the Mark Steyn Christmas Show. Brendon Gleeson recited Do Not Go Gentle Into That Good Night for an RTE Sport video promoting the Denmark v Republic of Ireland football international.

The Guardian carried a story about Michael Foot’s visit to the Boathouse in 1997; Herald Scotland chose Poem in October as their Poem of the Day, and Countryfile Magazine chose Fern Hill in a list of Poetry inspired by the British Countryside. The Times of India featured a selection of Dylan’s best quotes in a piece to celebrate his birthday on October 27th, and the Telegraph carried a feature on Dylan on the same day.  In November The New York Times carried a piece about Dylan Thomas in New Quay.

German born photographer Francis Reiss who photographed Dylan for Picture Post in 1946 has died at the age of 90. Reiss spent his later years in Australia and was working until recently. One of Reiss’s images was used for the Royal Mail stamp issued in 2014.

Likely Lads actor Rodney Bewes who toured as Dylan Thomas in A Boy Growing Up in 2013 has died at the age 79.

Dylan’s Do Not Go Gentle Into That Good Night was recited at the memorial service for the American feminist writer and activist Kate Millett.

The judges for the 2018 Dylan Thomas Prize have been announced as Namita Gokhale, Kurt Heinzelman, Paul McVeigh, Dai Smith CBE (chair of panel), and Rachel Trezise. Entries for the 2018 competition closed on November 6th, and the next milestone to look out for will be the announcement of the long list. 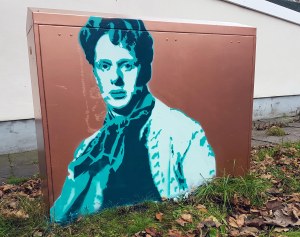 A new Dylan Thomas art trail has opened in the Uplands area of Swansea close to Dylan’s birthplace in Cwmdonkin Drive. The trail, commissioned by Uplands Council and created by Fresh Murals Co, features Dylan Thomas inspired street art on 10 utility boxes in the area.  A mural of Dylan Thomas has also featured in the recent refurbishment of Dylan’s old local the Uplands Tavern.

The Dylan Thomas Centre staged the I Might Want To Smile exhibition from July until December, showcasing the humour in Dylan’s work.

Writer and broadcaster Will Self was a visitor to the Birthplace at No 5 Cwmdonkin Drive whilst recording for his radio series Wilf Self’s Great British Bus Journey.

Swansea sadly failed in their bid to be the 2021 UK City of Culture, but not before Michael Sheen had quoted Dylan Thomas in his message of support.

Swansea celebrated the fiftieth anniversary of the death of Dylan’s close friend and fellow poet Vernon Watkins. An exhibition was staged by Jeff Towns at the Swansea University Library, a play written by Watkins’ widow Gwen was staged at The Hyst, and Owen Sheers invited six poets to write new work inspired by Watkins for a Swansea University event at the Taliesin.

Dylan’s former home in South Leigh, Oxfordshire, is up for sale. The Manor House was purchased by Dylan’s patron Margaret Taylor, and Dylan lived and wrote there from 1947 until 1949. He continued work on Under Milk Wood there, and wrote broadcasts such as Return Journey during the same period.

UK based poet Ira Lightman has claimed that Dylan Thomas was one of a number of poets whose work may have been plagiarized by the late former Poet Laureate of Canada Pierre DesRuisseaux.

Alistair McGowan led the cast as First Voice in a production of Under Milk Wood at the Watermill Theatre in Newbury. William King’s latest novel A Lost Tribe takes it’s epitaph from Under Milk Wood. Kasabian‘s Serge Pizzorno told RockCellar Magazine that he was a boyhood fan of Dylan Thomas. Cillian Murphy will star in a stage adaptation of Max Porter‘s Grief is the Thing with Feathers, winner of the 2016 Dylan Thomas Prize. Adrian Lester read an extract from A Child’s Christmas in Wales at the Children and the Arts carol concert at Holy Trinity Church in Sloane Square.

We can hopefully look forward to finally getting to see Rhys Ifans as Dylan Thomas in Dominion. The 2018 International Dylan Thomas Prize will be awarded at Swansea University on May 10th. The fourth International Dylan Thomas Day takes place on May 14th. Listen out for a song called ‘Dylan & Caitlin’ on the Manic Street Preachers forthcoming album Resistance is Futile, and in the winter we can look forward to a brand new Ballet Cymru production of A Child’s Christmas in Wales with music by Cerys Matthews.