Home › Articles › Quite Early One Morning: On the trail of Dylan Thomas in New Quay

Quite Early One Morning: On the trail of Dylan Thomas in New Quay 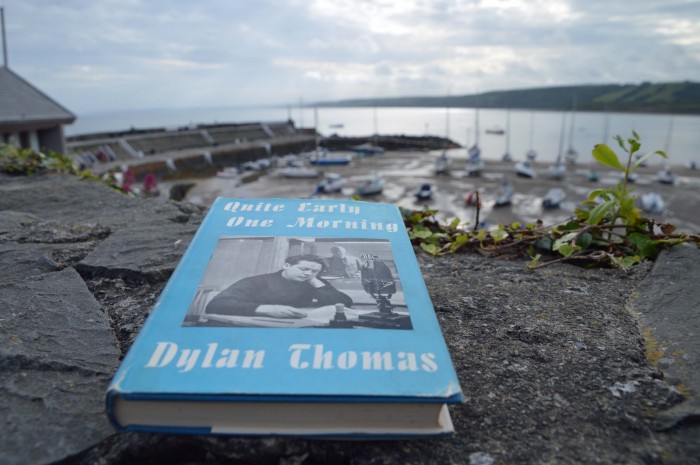 ‘The town was not yet awake, and I walked through the streets like a stranger
come out of the sea, shrugging off weed and wave and darkness with each step,
or like an inquisitive shadow, determined to miss nothing’

I’ve always enjoyed following in the footsteps of great writers. It’s the feeling that in some small way I have a shared experience with them, an insight into what might have inspired them. When rock singer and poet Patti Smith visited the Bronte’s parsonage at Haworth she told the BBC that she found “proximity very moving”, and I can identify with that. New Quay on the west coast of Wales can claim it’s own literary connections, as for a period during the second world war the poet Dylan Thomas and his family lived in a small bungalow just outside the town.

Thomas’s time in this relatively safe haven away from the ever present threat of German bombs proved to be a productive one, with work taking place on a number of significant poems, including some of his most highly regarded works such as ‘A Refusal to Mourn the Death, by Fire, of a Child in London’ and ‘A Winter’s Tale’. Dylan’s writing regime allowed for a daily walk into town, a walk that formed the basis of his 1944 radio broadcast Quite Early One Morning. The broadcast, a prototype for his later play for voices Under Milk Wood, describes an early morning walk just as the town is waking, and imagines the inner thoughts and dreams of the residents as they wake and greet the new day.

I’ve visited New Quay quite a few times, it’s a popular and vibrant town, but I’d never been there when it was quiet, and as I was spending a holiday close to the town I decided to make an early visit and experience the town in it’s morning mood.

The night before my visit I prepared myself by listening to Dylan’s broadcast, filling my head with his evocative images, and wondering whether they would resonate for me the next day. So, armed with my camera, I made an early start, and arrived in the town just after sunrise.

The usual hustle and bustle of the town was missing; the streets were quiet, the atmosphere calm, and I felt a sense of anticipation for the coming day. Missing were the usual promenading couples, the lazing sunbathers, intrepid dolphin seekers, and the happily fish-and-chipped and ice-creamed families. In their place were hallooing and shwmae-ing residents fetching newspapers and taking their early morning constitutionals, boat skippers loading provisions for a day on the waves, holiday-makers peering at the weather from their B&B breakfast rooms, and cafe owners sweeping yesterday from the pavement. Everywhere I walked I found tantalizing echoes of Dylan’s words; the ‘sea-spying windows’, the ‘reproving chapel’, the ‘salt white homes dangling over the water’.

New Quay was one of the inspirations for Dylan’s fictional town of Llareggub, and during my visit Under Milk Wood is never far from my mind, from the ‘gulls heckling down to the harbour’ to the ‘hill of windows’ and of course the ‘fishingboat-bobbing sea’. The town has changed in the seventy odd years since Dylan found a haven here, but look beyond the gaudy tourist signs and the slightly-too-many cars, and you half expect to glance in through the door of the Black Lion and spot a tweed-jacketed figure smoking a conscious woodbine, scribbling on a scrap of paper.

The Bluebell where Dylan reputedly drank with a young Richard Burton may have been newly transformed into a smart eatery, but it’s still there. The Seahorse, which was once the Commercial Inn, is still on the corner where Dylan left it, and Manchester House is still a shop, although it no longer bears the name. 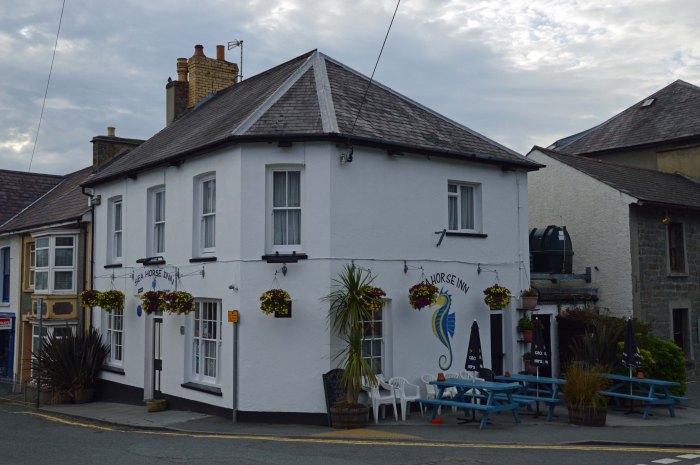 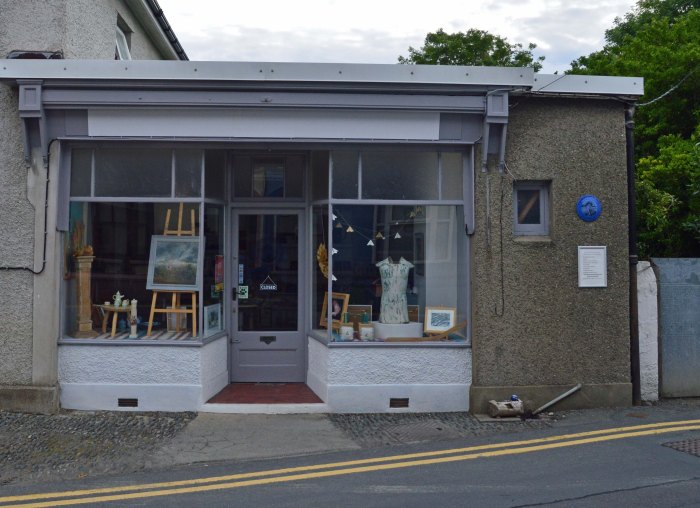 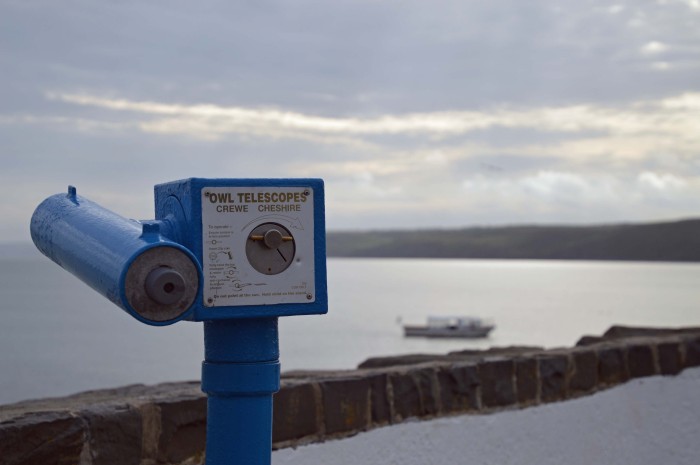 ‘he got a little telescope to look at birds’ 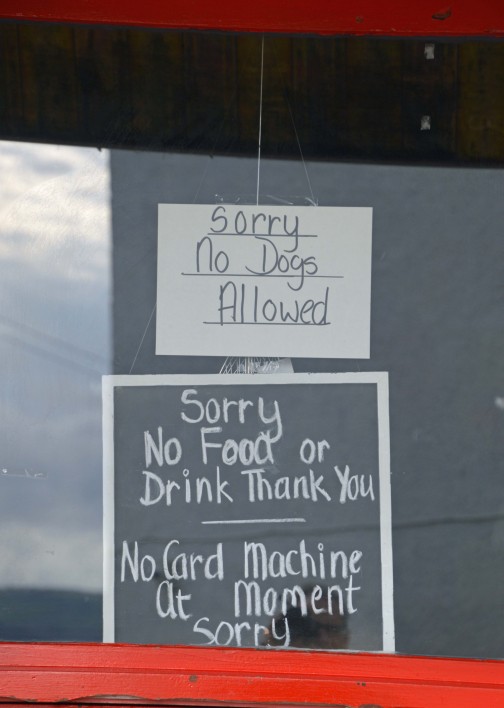 ‘the sun lit the sea town’ 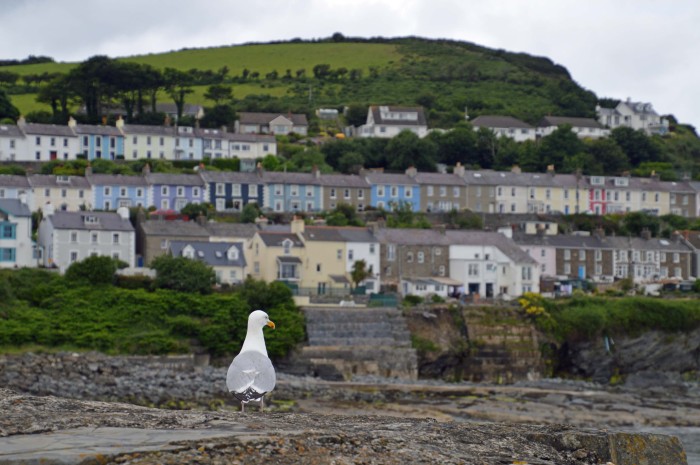 ‘the quay shouldering out, nobody on it now but the gulls..”

‘the windy town is a hill of windows’

The view from close to Dylan’s former home, Majoda bungalow

I spent a joyful couple of hours exploring the town, finding reminders of Dylan’s words around every corner. Slowly the town came buzzing to life and once again became the New Quay I was familiar with. Pods of dolphin seekers formed on the quayside as the first boat trips of the day left the harbour; brave, barefooted parents defied the waves declaring the water ‘just right’, the first ice cream of the day was dropped and met a sticky end in the gutter, and streetwise gulls took up their posts waiting to part the unsuspecting from their chips. Reluctantly my visit had to end, it had been a real treat, wandering the empty streets, and seeing the town afresh through a poet’s eyes. I can wholeheartedly recommend it.

You can follow in Dylan’s footsteps in New Quay by following the excellent Dylan Thomas Trail, devised by David N Thomas and created by Ceredigion Council. Download a PDF leaflet here. 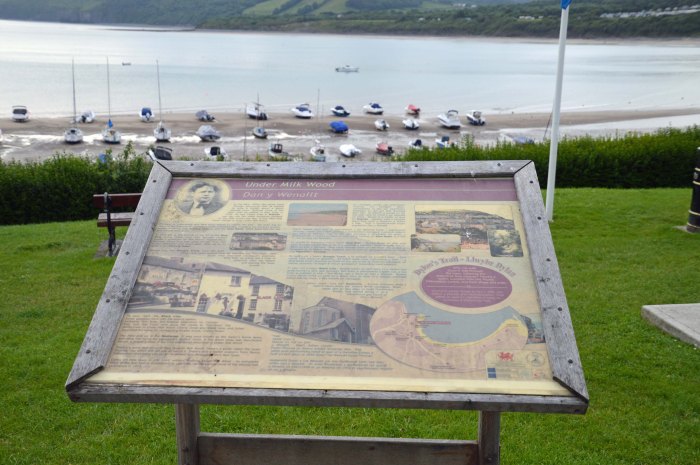 On the Dylan Thomas trail – Under Milk Wood information board

On the Dylan Thomas trail – The Hungry Trout, formerly the Post Office where Dylan posted his scripts

‘Thus some of the voices of a cliff-perched town at the far end of Wales moved
out of sleep and darkness into the new-born, ancient and ageless morning, moved
and were lost.’

Photographs in this blog post are copyright of Andrew Dally
Quotations are from Quite Early One Morning and Under Milk Wood by Dylan Thomas. Both available in print from Orion.