Home › Articles › Dylan Thomas : At Home in the National Library of Wales

Dylan Thomas : At Home in the National Library of Wales

When the celebrations for the Dylan Thomas centenary finally come to an end and we wake up with the mother of all literary hangovers, I imagine we’ll reflect on how we’ve commemorated our great poet and what the legacy of those celebrations will be. For fans of Dylan Thomas the sheer volume and variety of events has been almost overwhelming, a lifetime’s worth of events crammed into twelve months. Amidst this cornucopia of literary events are those that stand out as significant, events that may enhance Thomas’s reputation as an international literary heavyweight and cement his place at the heart of Welsh culture. The Dylan exhibition at the National Library of Wales is undoubtedly one of those events, a fitting tribute from one great Welsh institution to another.

The exhibition, opened by the poet’s granddaughter Hannah Ellis on June 28th, covers four gallery spaces and is one of the largest exhibitions ever staged at the National Library. Most of the material on display has never been exhibited in Wales before and includes items from the national collection, items on loan from the University at Buffalo collection, specially commissioned exhibits and an art installation. The exhibition runs until December 20th and I would urge anyone with an interest in Dylan Thomas to pay a visit. 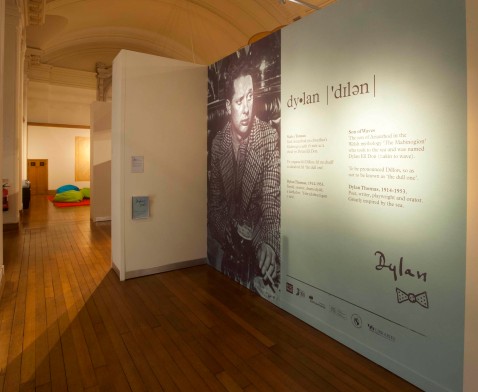 The main Dylan exhibition takes visitors on a beautifully presented chronological tour through the poet’s life and work, with manuscripts, letters, personal documents, artwork, photographs and sound recordings offering an intimate insight into Dylan’s world. The tour is punctuated by interactive exhibits including a poet’s pub where poems are on tap, a traditional typewriter wired up to send tweets, a Llareggub town model, and a giant gramophone with screen attached that shows footage from the wartime propaganda films scripted by Thomas.

Highlights of the main exhibition include a previously unrecorded boyhood poem, Dylan’s hand drawn map of his imaginary Llareggub, an annotated script of Under Milk Wood, and a manuscript for the unfinished poem “Elegy“. A postcard from the artist Alfred Janes congratulates Dylan on one of his two appearances on television, “it was superb and funny on a really grand scale”, and Edward Ardizzone’s lovely watercolour book illustrations for A Child’s Christmas In Wales capture Dylan’s boyhood Swansea.

Dylan’s role in the fledgling spoken word record industry is represented by his contract with Caedmon Records, and his time in New York is documented by a series of previously unseen snapshot photographs of Thomas thought to have been taken by the American poet Oscar Williams. Perhaps the most touching exhibits in the main hall are Dylan’s passport and travel documents including his last flight ticket, a poignant reminder of a return journey that was never made.  The tour ends on a positive note in a classroom where you can create your own poem on the wall or draw your own Dylan Thomas tribute.

The second room houses the Dylan Comes Home exhibition displaying material on loan from the Thomas archive at the University at Buffalo, a series of superb manuscripts that are being exhibited in Wales for the first time. It is moving to see the handwritten manuscripts of poems such as “Do Not Go Gentle Into That Good Night” and “Love in the Asylum”, and fascinating to see the alternative lines rejected by Thomas as he honed his words to completion. The closing line of the poem “Love In The Asylum”  had temporarily been “suffer the first madness that moved the earth and stars” rather than the eventual “suffer the first vision that set fire to the stars”. The line in what is perhaps Thomas’s best known poem “Do Not Go Gentle Into That Good Night” that reads “Old age should burn and rave at close of day” might have been “old age should light a fire in the grave” or even “old age should make a fire in the tomb”. A rare opportunity to see the work in progress of a great writer.

On display in the galleries around the staircase is Weak or Strong : The Art of Dylan, a series of artworks by Dylan, and of Dylan, from the national collection. Dylan’s own naive doodles and self portraits are on display alongside the work of his contemporaries such as Alfred Janes and Ceri Richards.

The final section is the specially commissioned art installation Ach y fi, Ach y fi : A Play for Vices by visual artists Peter Finnemore and Russell Roberts. The installation interprets the dark and mischievous world of Dylan Thomas through artwork, moving images, music and sound. A yellow neon “Ach y fi“ sign illuminates this darker gallery space, a space that is filled with images and sounds inspired by Dylan’s work including the track that marries the words of Thomas, the voice of Richard Burton and the dub reggae of King Tubby, “Under Dub Wood” by the Dubwood Allstars.

This is an exhibition that will reward both the committed Dylan Thomas fan and the casual visitor. It sheds light on Thomas’s life and creative processes by offering access to material that is normally the preserve of archivists and academics, whilst at the same time tapping  into Dylan’s sense of humour and demonstrating the accessibility of much of his work. It tells a story of his life but more importantly it celebrates his words. A highlight of the centenary celebrations.