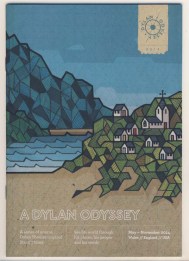 Dylan’s birthday on October 27th was marked by the launch of #DylanDay, a collaborative online celebration of Dylan’s work devised by the DT100 team.  Anyone with access to a smart phone and the video application Vine could request a line of Dylan’s poetry to record. The resulting clips were edited together by the DT100 team. Amongst those who took part were patron of the centenary Hannah Ellis, Professor John Goodby, rock singer Tim Burgess, author Neil Gaiman, and members of the Coronation Street cast.
The completed poems –
And Death Shall Have No Dominion
Do Not Go Gentle Into That Good Night
Love In The Asylum
Poem On His Birthday

A reception has been held at the House of Commons to promote the start of the Dylan Thomas centenary. The reception was arranged by Swansea West MP Geraint Davies and featured performances by the London Welsh choir and the Prince of Wales’ harpist Hannah Stone. Professor John Goodby launched his new critical study, The Poetry of Dylan Thomas : Under The Spelling Wall. and read extracts from the book. Politicians from across the political spectrum were present along with Dylan’s granddaughter Hannah Ellis, actor and comedian Griff Rhys Jones, and other figures from the arts in Wales.

Cerys Matthews later gave an interview to the Society’s Brian Roper for the New Welsh Review.

Swansea University have issued a call for papers for next year’s centenary conference, Dylan Unchained, which will run from September 3rd – 5th 2014.

November sees the launch of Under Milk Wood illustrated by Sir Peter Blake. This highly anticipated edition will feature the results of Sir Peter’s 25-year project to illustrate scenes from Dylan’s play for voices.  There will be a number of different editions available from Enitharmon Press.

The 92nd Street Y Poetry Center in New York where Dylan Thomas took part in the first staged readings of Under Milk Wood in 1953 is staging an exhibition  of photographs and ephemera to mark their 75th anniversary. The Love The Words exhibition features some rarely seen Dylan Thomas related material. The exhibition closes on November 25th, but material from the exhibition can be viewed online at http://www.92y.org/lovethewords

As international interest in the forthcoming centenary increases, articles about Dylan Thomas appeared in two major newspapers. Tracy McVeigh’s piece in The Guardian talked about Wales resurrecting Dylan’s reputation, and Stephen McClarence’s piece for Telegraph Travel went “on the trail of Wales’s most turbulent poet”.

Dylan’s birthday on October 27th was celebrated by Cerys Matthews on her weekly BBC 6 Music show when she talked Dylan Thomas with Chairman of the Dylan Thomas Society and Dylan expert, Jeff Towns. Their discussion was accompanied by music inspired by the work of Dylan Thomas. View the playlist here.

Composer John Metcalf gave Wales Arts Review an interview about his forthcoming Under Milk Wood opera. The opera will premiere at the Taliesin Arts Centre, Swansea, April 3rd 2014, before touring around Wales.

US based Dylan Thomas fan Jason Kirin has produced a transcript of Dylan’s brilliant and funny 1952 talk at the Massachusetts Institute of Technology, A Few Words Of A Kind. Well worth reading (or even better, listening to) if you’re not familiar with it.

Poet and writer Owen Sheers gave an interview to The Word Factory in which he mentions his forthcoming adaptation of Under Milk Wood and why he’ll “probably never be allowed back into Wales”.

Swansea University’s Professor John Goodby, a leading authority on the works of Dylan Thomas, talked to us about his landmark new critical study, The Poetry of Dylan Thomas : Under The Spelling Wall.

Twin Town director Kevin Allen told the audience at a film screening at the Do Not Go Gentle Festival that he is in negotiations to make a new big screen version of Under Milk Wood. An exciting development to keep an eye on.

An October issue of The Lady Magazine included Under Milk Wood’s Polly Garter in their series of Great Literary Ladies.

You can keep up to date with life at 5 Cwmdonkin Drive on their relaunched facebook page. Lots of events and information.

Annual Wreath Laying – The society will take part in the annual wreath laying at Dylan’s memorial in Poet’s Corner, Westminster Abbey. This year’s event takes place on the 60th anniversary of Dylan’s death on November 9th.

In a new production, Dylan Thomas: the Clown in the Moon, Rhodri Miles, fresh from his success in ‘Burton’, takes on the part of Dylan Thomas, first in Swansea, then in London, Laugharne, and finally New York. Dylan’s early life become darker as he finds it more difficult to write, his marriage fails, and his health grows worse. Set to go on tour after an initial presentation at the Grand Theatre, Swansea, the play is written by Gwynne Edwards and directed by Gareth Armstrong.

Tour dates can be found here.

The Colour of Saying

Musician Richard James and artist Anthony Shapland have created a short original film and music score exploring the vocal, lyrical, rhythmic and literary strands of Dylan Thomas’ west Wales world. The film will be screened at Chapter’s Experimentica Festival and will be followed by a conversation between the artists and Hannah Ellis, granddaughter of Dylan Thomas and Honourable Patron of the DT100 Festival. The film will tour in 2014.

Amongst the regular events arranged at the birthplace in Swansea are these Dylan themed events.

November 9th – Dylan and Dylan Remembered. On the sixtieth anniversary of the Dylan’s death, The Buttonsville Trio take a musical look at the influence of Thomas on Zimmerman including some new original compositions. For a Fifties wake we will have suitable refreshments to help you enjoy.

A production of Sidney Michaels’ play Dylan, about the last days of Dylan Thomas at the Red Theater, Chicago, November 23rd – December 22nd

A walking tour of parts of London associated with Dylan Thomas, on the 60th anniversary of his death, November 9th.

Wordy Shapes Of Women,  a night in which burlesque collides with Dylan’s poetry, November 8th

Gillian Clarke launches A Christmas Box National Poet of Wales, Gillian Clarke, reads from and discusses her response to Dylan’s A Child’s Christmas in Wales. This new piece of work has been commissioned by the Dylan Thomas Centre for readings and performances throughout Dylan’s centenary year and beyond. November 9th.

The King Street Gallery in Carmarthen will be holding an open art exhibition on the theme of Dylan Thomas. The exhibition runs throughout December with a preview on December 4th, and a poetry evening on December 13th.

The Theatre Clwyd production of Under Milk Wood directed by Terry Hands will go on tour,

There will be a showing of the 1972 big screen version of Under Milk Wood at the Pontardawe Film Club, November 6th. Director Andrew Sinclair will take part in a Q&A afterwards.

Under Milk Wood – An Opera

An opera based on the original play for voices has been composed by John Metcalf. A world premiere production by Taliesin Arts Centre in co-production with Le Chien qui chante (Montreal) & Companion Star (New York) and in association with Welsh National Opera.

The curtain raiser for next year’s centenary celebrations. Sir Peter Blake’s 25-year project to illustrate scenes from Under Milk Wood, “Llareggub”, will be exhibited at the National Museum of Wales, Cardiff, from November 23rd 2013 until March 16th 2014.

Sir Peter Blake will also be talking about his Under Milk Wood project at the Bath Autumn Book Festival, November 26th 2013.

A Child’s Christmas In Wales

Productions of Dylan’s seasonal classic include

Princeton Singers, Trinity Church, Princeton, New Jersey, December 13th
Lantern Theater, Philadelphia, December 5th  – January 5th – The world premiere of a new adaptation with puppetry.
Fluellen Theatre, Dylan Thomas Centre, December 12th, “Christmas In Wales“, a celebration, in words and music, of Christmases past and present, the second half of which is an adaptation of A Child’s Christmas In Wales, with Delyth Jenkins on harp.

A touring production of A Child’s Christmas In Wales adapted by Michael Bogdanov and presented by the Wales Theatre Company and the Swansea Grand Theatre will be touring theatres across Wales from October 29th 2014.

The National Library of Wales will stage a major multi-media exhibition of material relating to Dylan Thomas as part of the centenary celebrations. The exhibition, which will include Thomas manuscripts not exhibited before, will run from June 28th 2014 – December 20th 2014.

A public symposium will provide a finale to the exhibition , December 5th & 6th 2014. This will include a showing of Andrew Sinclair’s 1972 film adaption of Under Milk Wood and an interview between the director and Damian Walford Davies, as well as a number of guest speakers lecturing on a range of topics themed around the study of Dylan Thomas and his work.

If you are planning to stage a Dylan Thomas related event and would like to be listed on our blog then please let us know.