The 60th anniversary of Dylan’s visit to the International Eisteddfod in 1953 has been marked by tributes at this year’s festival. Dylan visited the Eisteddfod in 1953 to gather material for a BBC radio talk that was broadcast on July 13th 1953 on the BBC Welsh Home Service. To celebrate the anniversary, actor Robert Pugh made a recording of the broadcast that has been set to archive pictures of previous festivals. The tribute also included an exhibition and readings from the stage.

The official website of the 2014 centenary celebrations www.dylanthomas100.org was launched on July 18th.

The website is intended as an interactive resource that will allow the different places, groups, and events to come together as an online community. The site features an interactive map allowing events to be found geographically as well as through the timeline.

Royal Visit To The Boathouse, Laugharne

Prince Charles, who is the royal patron of the Dylan Thomas centenary, visited the Boathouse on July 1st, accompanied by the Duchess of Cornwall. During their visit they met with Dylan’s granddaughter, Hannah Ellis, and were treated to an extract from Under Milk Wood performed by local actors. Prince Charles was asked to press the button to launch the new website for the Boathouse  www.dylanthomasboathouse.com 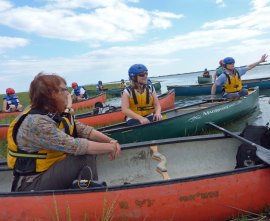 As part of their series of literary tourism events, Literature Wales staged a canoe trip across the Taf estuary at Laugharne in the company of Professor John Goodby, and Chairman of the Dylan Thomas Society, Jeff Towns. Read our blog write up on the day here.

A rarely seen portrait of Richard Burton with Elizabeth Taylor taken during the 1963 BBC recording of Under Milk Wood will go on display at the National Portrait Gallery in London. The portrait, which shows Taylor passing Burton a lit cigarette as he sits at the microphone, was taken by the Hungarian photographer Michael Peto, and forms part of a display of his work that will be shown from September 17th 2013 to May 31st 2014.

Terry Jones on Under Milk Wood

As part of BBC Radio 4 Front Row’s Cultural Exchange series, Monty Python member Terry Jones selected Under Milk Wood as his favourite cultural work. Dylan was “in love with the words, and in love with the Welsh community” said Jones. Listen to the broadcast here.

In The Shrine Of His Blazing Breast, readings from the works of, and works inspired by, Dylan Thomas, August 9th

The annual Dylan Thomas Festival takes place in Swansea from 27th October to November 9th. This year’s festival will include the launch of a new Dylan Thomas centenary commission by Gillian Clarke, a preview of Fluellen Theatre‘s production of Dylan’s “Rebecca’s Daughters”, and an evening of reading from Dylan’s work in his old local, The Uplands Tavern. 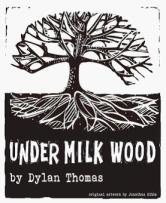 The curtain raiser for next year’s centenary celebrations. Sir Peter Blake’s 25-year project to illustrate scenes from Under Milk Wood, “Llareggub”, will be exhibited at the National Museum of Wales, Cardiff, from November 23rd 2013 until March 16th 2014.