Sixty Years of Under Milk Wood

To celebrate 60 years since the completion of Under Milk Wood, here is our selection of 20 milestones in the life of Dylan Thomas’ classic play for voices.

1. Perhaps the first seeds of Under Milk Wood were sown in the early 1930s when Dylan mentioned the idea of writing about the life of a fictional Welsh village to his Swansea friend, Bert Trick. Later, in December 1939, Dylan performed at a Red Cross fundraising event in Laugharne, and after the event  told his friend, the writer Richard Hughes, that what Laugharne really needed was a play about themselves.

2. Dylan originally planned to call his play “The Town That Was Mad” and had the idea that a town of eccentrics would be prosecuted in court and declared insane. He was working on this basis in 1950 but later abandoned this storyline for the Under Milk Wood we know today.

3. In 1944 Dylan was living at Majoda bungalow in New Quay, Cardiganshire, and whilst living there imagined a day in the life of the town for a radio talk he called “Quite Early One Morning”. The piece was broadcast on the BBC in December 1944, and shares some characters and dialogue with Under Milk Wood. 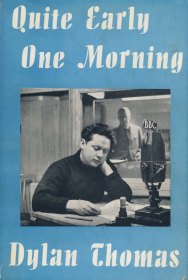 4. Where Dylan Thomas wrote Under Milk Wood has been the subject of a good deal of debate and study, but portions of the text were probably written in New Quay, Laugharne, South Leigh (Oxfordshire), Italy, London, and North America.

5. The geographic setting for Under Milk Wood has also been a cause for debate with strong claims being made for Laugharne where Dylan lived during the last few years of his life, and New Quay, where he lived during the 1940s. Both locations clearly influenced Thomas as would have many of the other seaside towns and villages of Wales he was familiar with.

6. Dylan’s sketch map of Llarregub (the village in Under Milk Wood), drawn to help him during the composition of the play, has a layout reminiscent of New Quay. The map is now part of the National Library of Wales collection.

7. The script was sufficiently developed by May 1952 for the first half of the play to be published in the Italian literary journal Botteghe Oscure. 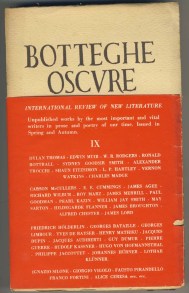 8. Dylan was scheduled to perform Under Milk Wood on his third reading tour to North America but arrived in April 1953 with the script still incomplete. His friend Liz Reitell who was assistant to John Malcolm Brinnin the director of the Poetry Center in New  York, resorted to locking Dylan inside the apartment of photographer Rollie McKenna in an attempt to encourage him to finish it in time for the first performance.

9. Following a solo reading of his still unfinished play at the Fogg Museum, Harvard University, Dylan left his final changes to the last minute before the first cast performance of Under Milk Wood at the Poetry Center, New York, on May 14th 1953.

By chance, a decision was made to record the performance on a tape recorder and so the only known recording of Dylan reading his most famous work was made.  Also captured was the audience reaction. Perhaps not knowing what to expect, the audience are initially quiet, but gradually more and more laughter greets the comic passages, and the play ends to a rapturous ovation. Dylan Thomas can be heard saying ‘thank you, thank you”.

The recording was subsequently released commercially by Caedmon Records. The opening can be heard here.

10. Following his return to Wales, Dylan gave solo readings at a drama school in Porthcawl on August 5th, and at Tenby Arts Club on October 2nd.

11. The BBC planned to broadcast the play, but obtaining a finished script from Dylan proved difficult. He finally delivered the manuscript on the eve of his fourth trip to North America in October 1953.  BBC producer Douglas Cleverdon arranged to have the script copied before returning the original to Dylan who subsequently lost it in a London pub. Dylan reportedly told Cleverdon that if he could find the original script he could keep it. Cleverdon toured a number of the pubs Dylan frequented and found the script in the Helvetia pub in Old Compton Street. Years later Dylan’s widow Caitlin unsuccessfully attempted to recover ownership of the script in court.

12. Dylan had planned to revise the script again on his return from North America, but his death in New York on November 9th 1953, at the age of 39, meant that the only further changes made were by editors attempting to produce a definitive work from the various annotated scripts.

13. The BBC premiered their radio production of  Under Milk Wood on the Third Programme on January 25th 1954. Richard Burton led the cast as First Voice, and Dylan’s friend Dan Jones recorded the music, including the children’s singing parts, which were recorded at Laugharne School.

16. The first television production was broadcast by the BBC on May 9th 1957.

18. In 1972 a big screen version of Under Milk Wood was made with an all star, mainly Welsh cast, directed by Andrew Sinclair. Richard Burton again took the part of First Voice, with his then wife Elizabeth Taylor playing Rosie Probert, and Peter O’Toole playing Captain Cat. The film was shot on location in Fishguard, Pembrokeshire. The film’s theatrical trailer can be seen here. Our interview with actress Susan Penhaligon can be viewed here.

To mark the 50th anniversary of the film in 2012, director Andrew Sinclair generously donated the film’s media rights to the people of Wales, with income generated by the film being used to fund arts based activities in Wales. He also donated his collection of memorabilia relating to the making of the film to the National Library of Wales.

19. In 1988, Beatles producer, Sir George Martin, arranged an album version of the play that included musical pieces  by Elton John and others. Another high calibre cast was assembled including Sir Anthony Hopkins, Bonnie Tyler, and Sir Tom Jones.

20. In 1992 an animated version of Under Milk Wood was commissioned by Welsh broadcaster S4C. The BBC archive recording of Richard Burton reading the part of First Voice was used.

Under Milk Wood has continued to influence and inspire in the years since it was first performed. British jazz pianist Stan Tracey‘s 1965 jazz suite, “Under Milk Wood” is regarded as one of the finest British jazz recordings, and pioneering British pop artist Sir Peter Blake is undertaking a mammoth project to illustrate every scene from the play. Ballet and operatic interpretations of the play have been produced, and Australian composer Tony Gould has set the play to music. 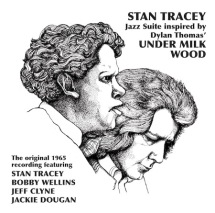 Under Milk Wood has never been out of print, and the play is performed in numerous productions around the world every year, continuing to introduce new generations to the work of Dylan Thomas.

A fine collection of Under Milk Wood memorabilia can be viewed at the permanent Dylan Thomas exhibition at the Dylan Thomas Centre in Swansea.